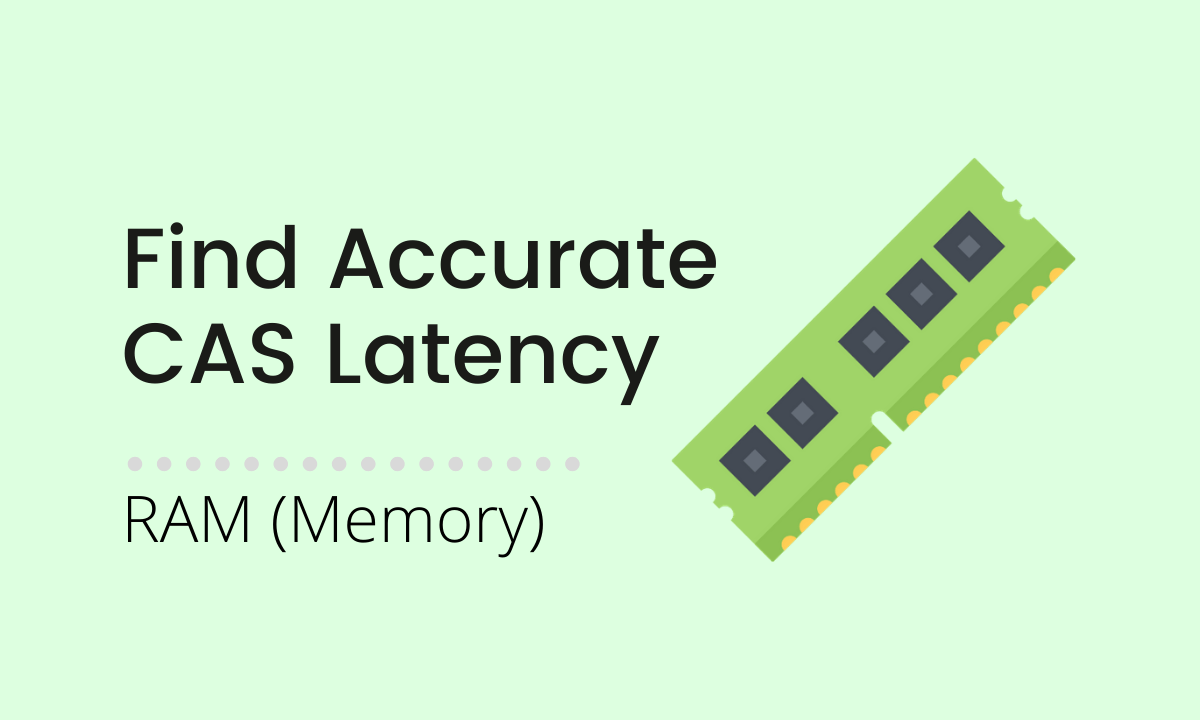 Contents hide
1 What is CAS Latency (CL) Ratio?
2 Is a higher or lower CAS latency better?
3 Can you mix CAS latency RAM?
4 What is a good CAS latency for RAM?
5 How do I check my CAS latency?
5.1 Method A: via CPU-Z
5.2 Method B: via Piriform Speccy
5.3 Method C: via Command Prompt / DOS / PowerShell

Are you one of those, who searched a lot about CAS Latency (CL) ratio? Still unsure about exact meaning & where to locate it? Don’t worry, will try our best to explain it.

Before diving into definition, let us see what the full form of the CAS.

I bet; You may still be skeptical about CAS latency ratio. Since, the full form does not reveal any understandable meaning.

Don’t worry, why we are here? We are doubt solver. 🤩 Let’s look at CAS latency ratio step by step.

What is CAS Latency (CL) Ratio?

Now, it’s obvious to have doubt that who is requesting the data to RAM. Right?

Before jumping in this technical arena, let me tell a non-technical story.

In above illustration, Manager asking the salesman for box which contains 3 mangoes. After searching for 2 minutes, the sales concluded that the box ‘C’ contains the 3 mangoes.

In above illustration the time gap is 2 minutes (i.e. time taken to process the request). So, these 2 minutes is nothing but the CAS latency ratio of our illustration.

In above illustration the CAS Latency Ratio is 16.

Right now, few doubts might come in your mind. Some of them discussed below.

Is a higher or lower CAS latency better?

Can you mix CAS latency RAM?

Though NOT recommended; but technically you can mix different CAS latency RAM modules.

However, the motherboard will match the CAS latency ratio by setting higher CAS ratio among the installed RAM modules.

For example, you have installer two RAM modules with CL ratio 15 & 16. Then motherboard will set CL ratio 16 for both RAM. Indirectly, low latency RAM will be degraded to match with higher latency ratio of another RAM.

What is a good CAS latency for RAM?

The performance of the RAM module is depending on multiple factors. Such as clock speed, latency ratio, rank etc. So, merely judging RAM on the base of CAS latency (CL) ratio is not right.

Sametime, its recommended to do not mix RAM with different clock speed or different CL ratio. Otherwise, such RAM modules will not be able to work at their specified speed.

For example, we have two RAM modules with following specification.

Which of these would you choose? Right, as per our theory, we will go with lower CL ratio RAM. Here, RAM module B is faster than A. As lower CL ratio is better.

How do I check my CAS latency?

Method A: via CPU-Z

Follow the below steps to find out CAS Latency (CL) Ratio.

If that CAS#Latency (CL) is 9.0 clocks then your system currently running on RAM with CL9 Ratio. Which means if you want to upgrade the total RAM size without replacing the existing RAM, then you must purchase another RAM with same CL ratio and clock speed.

Be careful with about DRAM Frequency and Clock Speed, which may confuse you while a selection of RAM. If you are Windows 8 or 8.1 users, then you can easily find out clock speed. It is located under Task Manager (Press Ctrl + Shift + Esc) > Performance > Memory. Alternatively, visit a Wikipedia to find out clock speed when you know the DRAM Frequency or Command Rate.

Moreover, the SPD tab  in CPU-Z reveals detailed report of your RAM. Alternatively, you can Google for the current part number and manufacturer to dig exact information about your current RAM. It may be helpful to predict the second RAM. It’s better to choose the RAM from the same manufacturer for utmost compatibility. Hope this information will help to purchase your next RAM.

Method B: via Piriform Speccy

Piriform Speccy is another good utility to fetch out CL Ratio. It also reveals tons of information of your device. It could show live uses graphs and temperatures of various components. You can export those details as XML, text file or print / PDF. Just open the app navigate to RAM section. Now you can view Slot information, type, size, CL ratio and much more. See the following screengrab.

In some cases, installing new software is not permissible due to the administrator’s restriction. Or user unable to enter GUI mode (computer restarting in DOS mode). So, we are writing a solution for you. Thanks to Fazlul Haque, whose comment inspired us to update this post.

I hope this post will be helpful for you, to find the compatible RAM. Kindly comment your doubts, suggestions. Or just covey thank you if the above solution worked for you.

How to auto-delete emails from cPanel using a cron job